Team Bridge Builders came together to look at how to bridge the gap between agile teams and those in the business around them.

TL:DR? Scroll to the bottom of the page for the team outputs

Initially, our discussion was wide ranging. Should we look at merging with the team that was looking at coaching agile at the senior management or so-called ‘C Suite’ level? We decided against.What should our outputs be? We decided we would create a set of methods or experiments that could be run in our organisations to test out how to bridge the many gaps that existed.

With that agreed, we set about setting out as many of the gaps that we could think of,  writing them all on sticky notes until we had a huge list. We then tried an empathy map model for grouping them together, but this didn’t give us the prioritised backlog we needed. 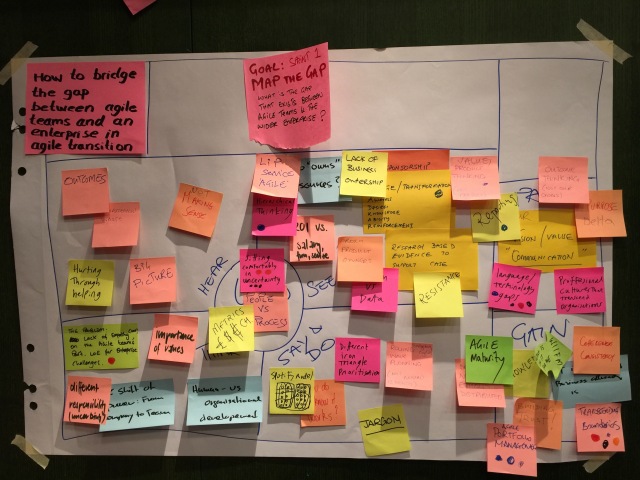 So we decided next just to dot vote the ideas we were most interested in (three votes per team member), and through voting and discussion arrived at a short list of topics we’d like to explore further.

This left us with four areas to explore:

After which it was off to present our first sprint review, which you can watch here.

Having identified the areas we wanted to work on, we worked in two teams, one looking at transcending boundaries, the other looking at sitting comfortably with uncertainty.

The goal for both of these was to refine the topics further, and start to think of some ideas for experiments, ideas and proposals for how to work on the issues, according to the release plan we had created.

For the team working on sitting with uncertainty, a number of ideas arose. Was planning and predication in the modern business really just a modern version of fortune telling through animal guts (haruspicy), looking at the flight of birds (augury) or the tea leaves / coffee ground left in the bottom of your cup (tasseography)? How could you get people exploring this issue? How could you explain it to someone in an elevator in 30 seconds? Why do jokes make you laugh when the unexpected happens in the punchline, but plans make you angry when the unexpected happens in the project? How could you ‘vaccinate’ someone to immunise them from feeling pain and fear around uncertainty? Who would take a vaccination from someone they didn’t trust?

Meanwhile, the other group were busy working on the idea of a game that could be played with senior managers to bridge the gap between them and agile teams, based around the idea that if you speak in a language someone understands, you reach their mind, but if you speak their language you reach their heart. They started to map out an approach for a game, possibly using cards, that would develop empathy between hierarchy levels through role switching. 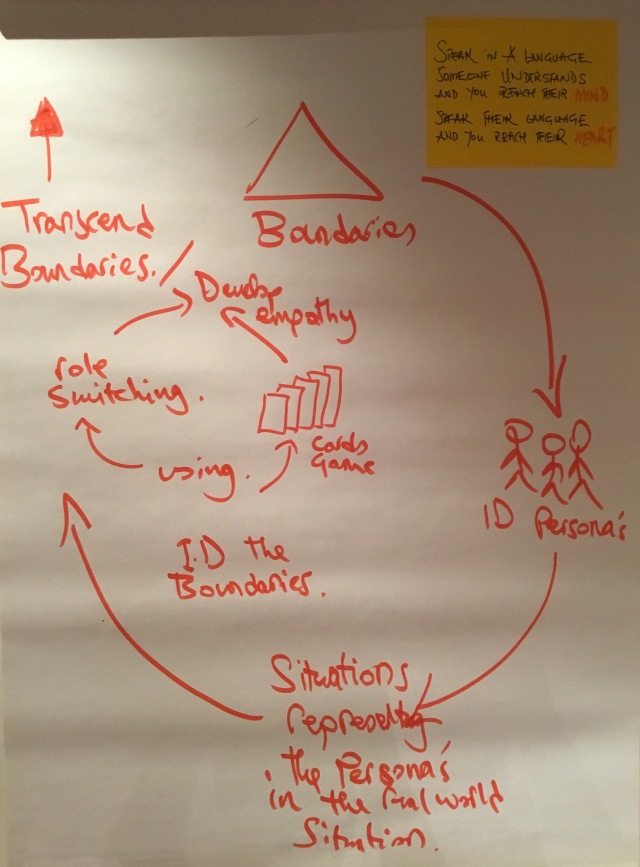 With that, our time was up, and it was back to the main room to present our thoughts. The sprint review for sprint 2 is in the video below.

In sprint three, the group working on sitting comfortably with uncertainty started to develop and refine their outputs, which were decided to be a series of short videos setting out ideas and experiments for people to try out in their own organisations (see bottom of page).

…and a really interesting analogy about how holidays and weather demonstrate how planning on makes you unhappy, whilst sitting comfortably with uncertainty makes you much happier whatever the weather. 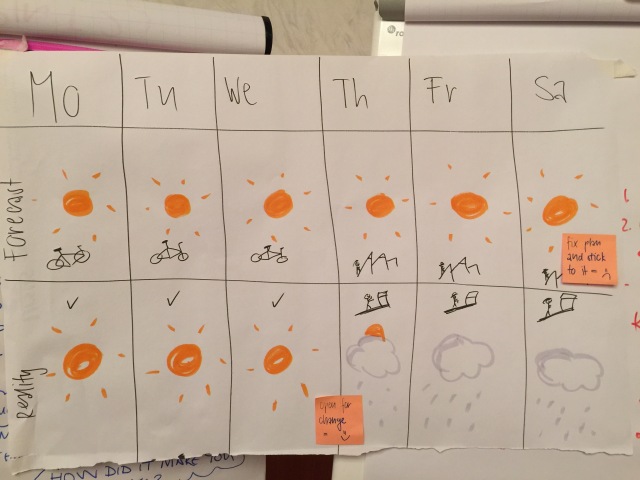 The group working on transcending boundaries refined their for a game to bridge boundaries across hierarchical levels even further, in order to allow different personas to finish the game with the same level of understanding of agile values.

Then back for our third sprint review, which you can watch below.

For sprint 4, we wanted to consolidate our work so far to deliver some tangible outputs. However, as the group working on uncertainty had largely completed their work, they decided to pick up another ticket from the backlog, looking at the language barriers between agile and non-agile teams. This was developed as a quick proof of concept, writing out each of the ‘agile’ terms, and seeing if a corresponding ‘non-agile’ term could be found to match it.

In some cases, a corresponding term could not be found, which led to the thought that this dictionary might also be a useful teaching aid for agile values and frameworks, highlighting that where gaps in language exist, they point to gaps in practice between the agile and traditional worlds.

This initial dictionary has been uploaded as a Google Doc, to encourage others to critique or build on it following the Scrum Coaching Retreat. There’s a link to it in the outputs at the bottom of this page.

Just before the sprint review, like, really just before it, team member Michelle Forni had a brainwave about restructuring organisations to improve agility, and mapped it out on a flipchart pad. So it didn’t get included in the sprint review, but is recorded as a video for the final outputs of the team below.

Slightly incomplete as it is, here’s the sprint review for sprint 4.

Sitting Comfortably With Uncertainty In Agile

Why Planning Makes You Unhappy

The Agile To Non-Agile Dictionary v0.1.0

Team Bridge Builders was made up of (in alphbetical order):